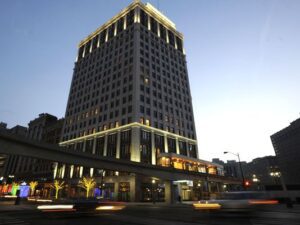 Users of the Grand Circus Park underground parking garage in downtown Detroit will soon begin to see upgrades as a new joint venture takes over operations of the structure and forms a conservancy to oversee capital improvements to the park itself.

The garage serves long-term lessees in the area, including residents of the David Whitney Building, Kales Building and Broderick Tower, officials said. At times, parking is also available to the general public.

Parking garage users will begin to see immediate improvements at the garage, said Ryan Hunt, president of Nashville, Tennessee-based Premier Parking, in a statement. Renovations will include security and technology updates that will take place over the next two years, the operators said.

“The Roxbury Group is dedicated to the Grand Circus Park district and to helping give the residents and businesses of our neighborhood the service and amenities that they deserve,” said David Di Rita, a principal of Roxbury, a Detroit-based real estate development and investment firm.

“We are committed to conducting these important improvements to ensure the Grand Circus garage will fully serve the needs of our community, and to the long-range improvement of this historic public space.”

The original article from Detroit News can be found here.